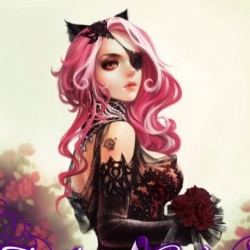 Further detail description:
the end of her tail is covered in a fluff of hair that glows. her horns grow backwards from her head, with 3 piercings in each horn.
She has a diamond shape marking on her back, both thighs, and both shoulders. All the diamonds connect with a line. From her shoulder the line continues down and swirls around her arm a few times, meetings small diamonds on her hands. One Line comes from the bottom of back diamond and travels down her tail, swirling around it before vanishing into the fluff. Then from the top of the back diamond leads to a smaller diamond on her forehead.

Her wings start black at the top and become the green of her markings as it proceeds down.

Her nipples are pierced with spike studs.
She has a very strong sense of smell.

C*ck description: pointed tip with inactive barbs surrounding it. 3 Lines of barbs starts 2in below head and stops 2in from knot. Inflatable rigs, under c*ck, start 2in below head and stop at knot. Rigs inflate along with inactive barbs on head, to ensure impregnation, rigs help push knot in as well as semi-grab the walls. Inactive barbs, upon womb penetration, flare apart and inflate to ensure target can not remove her c*ck.

• Name: Daniro Tyrell
The name, despite the different writing, has the same pronunciation as Danilo. As for the surname, it can be changed to Oakheart, for security reasons, after the explosion of the Septum.

• Age: 16 years
Born on October 9, during a calm night with a full moon, the boy would have this age at the beginning of the seventh season of the series.

• Gender: Male
The boy is only attracted to women, becoming uncomfortable with men.

• Hair: Blonde
Not very long hair, with bangs close to the eyes. Its sides are much shorter than the total length. Despite the blond tone, most of the time it can resemble brown, due to a slightly strong shade.

• Eyes: Green
A little opaque and faint tone, but not sounding like dark. Moonlight can bring your eyes to life like two polished emeralds.

• Body: Athletic
Being 167 cm tall, and weighing about 55 kg. The boy's physique has a well-distributed weight and a fit body. His muscles are not as exuberant, but they have their value. It has no scars on the body. Only two inches, harder. Other measures proportional to a boy your age. White skin, but far from being totally pale, just a common shade. Without much hair, even without a beard due to his young age.

He was always looked after by Olenna during much of his childhood and adolescence. The brothers, having great love for him, as well as the whole family, hid the evidence of his existence from the world, except for his kingdom, where everyone knew him very well.
Loras, an excellent fighter, taught the boy everything he knew. All tactics, strategies, forces and movements. He certainly had the potential to be much better than his older brother.
Margaery, in the face of all her beauty, taught her brother the art of seduction, although he showed little interest. But you would never know a good time to use and put it into practice.
His grandmother taught him everything about politics, both in the kingdom and outside. All the knowledge necessary to live.

Outside of Highgarden, already in King's Land, the family continued to hide the boy, despite always keeping him close. Thanks to immense protection, the boy was not on the scene when the Great Sept of Baelor exploded. House Tyrell would definitely be extinct, if not for him. But Daniro had no plans to return, at least not now. His thirst for revenge would sing louder.

There is no exact information about what happened to the Kingdom of Highgarden. It assumes that the affiliated houses administer the kingdom, but with no impetus to take the real place. Other rumors say the place would be under the Lennister's command. There is no accuracy so far.


[Thank you for reading this far. If you can enjoy it, I will know that you have read it and that we are ready to move on, we just have to create a plot, and I am very versatile for that.
The photo in question is of the character years older, should the need arise. But the profile image prevails as its current appearance.
If you miss any details, let me know. I'm inexperienced but I intend to improve!]

Age: 19-24
gender: Female
sexuality: Straight.
~
Likes: outdoors, cooking, books, dogs, lakes,
dislikes: indoors, people looking down upon her, ogres,
Fears: death, being left behind.
~
Weapons: her father's sword, a dagger, sometimes bow and arrows(depending on the rp)
magical abilities: N/A
~
Personality:
Emma although childish at times, is a serious girl who tries to follow the footsteps of her deceased father. She is known to be a bit ignorant, but has a strong spirit, and can tries to help anyone in need.

I am well aware that I should’ve posted this earlier, but I guess that late is better than never. So, without further ado, here is the message |

*Pure submissive characters (I am honestly sick and tired of people who play as subs and nothing else. I’ve had numerous problems with this on the site that I roleplayed on shortly before this, so I am going to clarify this now. I WILL NOT ACCEPT PURE SUB CHARACTERS. You can change your submissive character to a switch or you can settle with the fact that there will be no sm*t. However, on a rare bases I might accept a character like this, but only if I have roleplay with you before and genuinely enjoyed it)

Cal keeps me company while writing.
He told me to write about things that make me angry, but then I ask myself: What exactly makes me angry?
I tend to keep to myself. I tend to bottle in what Im feeling, what Im thinking, and what Im going through. I tend to forget about it all, distracted by Dave, that sh*tstain, and blinded by Cal.
I don't know what infuriates me.
Perhaps it's when Dave doesn't put the remote back, or when Dave deletes the sh*t I have recording, or when Dave doesn't make dinner even though he knows on Tuesdays, thats when he makes dinner. Tuesday isn't my day. It's his day.
Dave.
Dave I miss when you cook sh*tty cereal for me. You're not supposed to cook cereal, moron.


Journal 2-
F*** yeah, bring it on climate change. Cal and I can take it.
Not Dave though, f*** that kid. The poor thing still hasn't poured me a glass of cheerios' because he also hasn't done the dishes and we're having to eat cereal from cups. I should probably clean up the place, but I've been busy with more important sh*t. You know, sh*t that isn't cleaning. F*** cleaning.
Maybe I'll get some Take-out today, cause hibachi sounds f***ing perfect right now. Hold that thought Climate Change, don't off us all just yet.