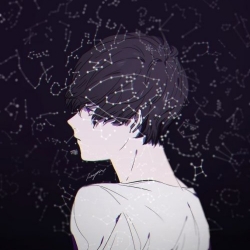 ~ Has two sisters. Eveline and Hannah. Hannah is Amy's twin, except Hannah has black hair, black eye color, and likes black clothes. Their like polar opposites. Eveline is the youngest, but the weirdest of the sisters.

~ Had an abusive father who was put in jail for domestic violence, but he's being released soon.

~ When she goes to sleep, she enters this dream-like state where she isn't actually asleep, but wandering around the world lucidly doing whatever she pleases. (No she is not sleep walking. There is no name for what she's doing in this state.) There is no explanation for this. No one can understand it, and neither can she. Her life is like one big DMT trip to sum it up. She doesn't abuse this ability, but she doesn't know what she's doing with it either.

- Sm*t/ Er*t*c whatever you want to call it
- Incest
- pretty much anything sexual .. To many people do it and that is not what an Rp is about nor is it the most needed thing in life...

Personality:
Lucia has the temper of a bull and the happiness of hell itself, although she does not smile as much, she takes it in to consideration not to emote anything what so ever, if anyone were to accuse her of anything she would show her most darkest side. although lucia tends to cry quietly and try to keep a calm atmospheric mood.

Bio:
Lucia Wagner: Second eldest child in the Wagner family. Lucia Wanger daughter of Elizabeth and Christopher Wagner has lived quite a wealthy life style. Although her mother died a tragic death which had been planned by her father so that he would get the wealth from her mother. At a young age Lucia was quite a spoilt girl and demanded everything in life but as she grew older her spoilt personality disappeared along with her two brothers who died of a horrible disease.

0 | 0 Comments | by LittleBallOfDarkness | 9 hours ago

summary: min yoongi is a plaything for the very cruel mistress of fate because of how much he gets tracked down. also he's very subtle about waterbending.

prompt: " Look, I'm not a supernatural fanatic or anything but I swear man, every time this kid next to me gets frustrated, he /growls/. I mean, actually growl- and it sounds like some kind of rabid, steroid-induced dog. I'm not saying that they're a werewolf, but they're /totally/ a werewolf man."

In one world, Min Yoongi was adored by all as an idol. In others, he was a sadistic criminal. To a few, he was an emperor of royalty. All were of high status of fame and power.

In this one, he's a mere refugee and anonymity was his solace.

Theoretically, if alternate universes were, in fact, a real possibility, he would probably escape to one of these alternate realities. If it meant surviving— to keep going despite what others have labeled him, he would travel there if he could.

Unfortunately, the reality wasn't so kind.

Fortunately, caffeine and spite only served to fuel his motivations.

Nevertheless, even when life went to sh*t as the last waterbender of his kind, he found out as early as fifteen years old he had to keep going. He had to keep moving forward. There wasn't much choice, and life had its fair share of playing him with certain abnormalities he'd never thought of experiencing.

He didn't have to be mentally strong or physically strong. He just needed to survive, and survive he did.

It was a nice thought to think that his mere existence alone spite a lot of people hunting him down.

That was a thought that had Yoongi thinking during a discussion with one of his friends.

And why, yes. Contrary to belief, he did not, /in fact/, like shutting himself in his studio all the time. He didn't like to stay isolated—though, he certainly didn't mind solitude- but even then, even he had his limits with so much solitude for so long. Ever since a world-wide lock down had seemed to happen recently, it was getting harder and harder to slip under the radar abroad.

However, he supposed that it wasn't so bad considering that he got to hear the thoughts of other people.

Such as the situation he was currently in right now.

Ume, a girl of sixteen whom he viewed as his sister, slammed her hands on the table. " Look, I'm not a supernatural fanatic or anything but I swear man, every time this kid next to me gets frustrated, he /growls/. I mean, actually growl- and it sounds like some kind of rabid, steroid-induced dog. I'm not saying that they're a werewolf, but they're /totally/ a werewolf man. "

" I'm not sure if you're trying to convince me or yourself judging by that tone of yours. " Yoongi remarked in amusement, taking a sip from his large caffeine container.

" I honestly don't know either. But, I know what I saw. It's totally real man. It was just- it was so surreal. " Ume replied, shaking her head. " I couldn't believe what I was hearing. "

" Well. " Yoongi adjusted his coat, sighing. " I won't deny that the supernatural isn't real, because I personally believe it is. "

Ume tilted her head. " Really? Are you religious?"

Yoongi shook his head, dark strands of his fringe covering parts of his eyes. " Maybe. I'm not sure. I just think there's too many coincidences happening here. "

" Like how you repeatedly got in trouble with authorities for something related to water?"

Nearly spitting out his drink, he instead calmly downed his caffeine in one go before setting the counter on the table.

" ...Yes. " He replied after a moment of silence. " Like how I repeatedly got in trouble for things related to water. "

Ume rolled her eyes, leaning back on her chair. " God, I still have /so/ much questions regarding that. Did you, like, poison the water supply or something? "

Yoongi's finger twitched. Water spilled out from Ume's cup for a split second, and his blood went cold.

Mentally grateful that the glass from her cup was filled to the brim and that her eyes still seemed to be prying on his being, the older male shook his head and discreetly put his hands under the table.

" Nah. I just have something that they don't like. "

Naruto rp , rp as a character of my choice !! I’ll rp as an oc message me for my discord info !!

Height: 5’7
Weight: 122 lbs
Frame/Build: Slender
Hair Length: To his back
Hair Colour: White
Hair Style: Wavy, strands in the front are tied at the ends
Eye Shape: Round
Eye Colour: Cornflower blue
Skin Colour: Sickly pale
Face Shape: Narrow
Voice: Soft, however rather monotonous
Tattoos: None
Piercings: None
Scars: Everywhere, even his face
Other Notable Accessories: Has a red mask he always wears, a black upside down cross under the left eye. He also wears a rosary with black beads, the cross being upside down and an upside down pentagram in the center

Good Qualities: Loyal, organised, patient, not a pushover, has a teasing and childish sense of humour.
Bad Qualities: Stubborn, bottles emotions up, has a hard time expressing his feelings
Strengths: Agility, intelligence, physical strength
Weaknesses: Social situations
Habits: Rubbing his neck and collarbones, chewing his lip
Phobias/Fears: Mysophobia, pedophobia
Loves: Stella, comfortable silence
Hates: Children, politics (however if he does get into it he will defend his beliefs to no end)
Other things to know: He knows English and Latin. It has also been noted he does have both masochistic and sadistic tendencies. He often will use nonverbal communication as well.

↬ Scars ↫
One across his back from his mother

↬ Piercing ↫
One in his right ear

↬ Strengths ↫
He try’s stand up for himself at times

↬ Weaknesses ↫
Being yelled/ screamed at, it reminds him of his past

↬ Habits ↫
Spacing out
Being clingy if he gets attached

❝real depression is when you stop loving the things you love❞

Personality//: Yeona is one of those ride or die bitches when she gets to know you. At first, she may be a little rude or blunt, but as she warms up, she’ll get a bit more open. She honestly does not give a single f*** about anyone’s opinions, choosing to ignore them cause she’s hella confident in her personality and appearance. She’s pretty bold and won’t take any bullsh*t.
Likes//: guys with tattoos, dumplings, being complimented, and dancing
Dislikes//: people touching her without her permission, annoying clients, silence, and tea
Hobbies//: dancing, drawing (more like doodling), getting high
Habits//: she curses a lot, getting a little in her head, biting her lip, taking a hand through her hair
Bad traits//: little rude, blunt as f***, impatient
Good traits//: knows when someone is lying, loyal until death, observant and friendly

EXTRA / /
- she’s an only child
- Her parents died when she was 10 in a robbery so she grew up in a foster home until she was 15
- She was adopted by a abusive foster mom who beat her and forced her out of the house at 17
- She stayed at a friend house for Andre years until she heard about stripping at 20
- She became a stripper at age 20, climbing quickly
- She can speak a bit of English, enough to carry a conversation
- One of her major pet peeves in when someone touches her without her permission
- She loves guys with tattoos for Some reason. It’s just always been her thing
- A pet name she really likes to be called is doll or babygirl
- Her favorite color is green
- Her eyes are actually blue
- She dropped out of High school at 16
- She began using drugs around age 18
- She’s super confident in her body, not giving a f*** about beauty standards
- She lives for compliments