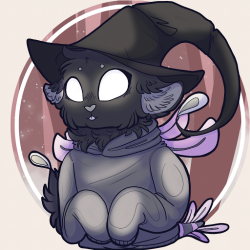 Dancer: I suppose so. Video games it is then I guess.

*She scrunches up the letter, throwing that and the envelope in the bin.*

Dancer: No. Nothing good unless you've got something. Mother's going to try to send my little sister, Ember, around soon apparently. Seems more like Ember's pretty fed up of being housebound and wants to visit me to get away from them though. I hope Lime will be alright with that...

SchemingWeasel replied to Spade's topic
*B takes a moment to consider these options before giving a certain nod.*

B: That's alright. The centre, if you may. If I can work my way from there, it should be easier to determine my surroundings. I'll take out and use my cane once we're there though I can hear many people here, I'm sure if I do get lost I can ask for help. Thank you.

*Celaeno draws a blank, huffing. Splint pounces on one of the Corgowls, causing a great deal of yapping. This doesn't help the gaster to think, causing them to pinch the bridge of their nose in frustration before picking the cat up and hoisting them out of the way of causing more trouble. They seem less pleased by this, gently growling and swiping the air.*

Celaeno: (I think the only thing that sets me apart from all of you doppelgangers is you all haven't got... You're not experiencing...)

*They huff, placing Splint back down and gesturing to the floating VOID matter that seeps from the cracks in their skull. As their hand brushes it, it sticks to their fingers like sludge before evapourating.*

Celaeno: (Whatever this is. Though a nickname such as "The one with the mysterious dark matter from their head" doesn't appeal to me. It sounds more like something Alphys would find exciting.)

*He is quiet for a moment, likely thinking in sad reminiscence of his old colleague and friend, realising how thrilled she would be to see all of this and hoping she is doing better than he is. Though his expression doesn't last long, he very quickly returns to his usual stoicism.*

Celaeno: (But it does remind me of that human myth on a monster who was labelled as "The Dark One". Their name was... Celaeno if I remember correctly.)

*Rose is beginning to zone out again, watching their surroundings. Celaeno frowns at her obvious lack of interest, summoning his signing hands. This she seems to understand better, growing bashful at their following words.*

Celaeno: (If it makes your human pay attention better, I can sign. I can understand Common well enough, I just struggle to speak it at all.)

Rose: Sorry, a lot has happened recently, I suppose. I'm not usually this distant, I'm sure I'll be fine after some coffee.

*Celaeno folds his arms, trying and failing to not look so easy to read.*

Celaeno: (About that. Do you perhaps have any cigarettes here?)

*Geno hurries over, thrusting the book into Horror's chest and dancing excitedly in place.*

Geno: Look! Look! Read it! It explains EVERYTHING! Mostly. Of one thing. BUT EVERYTHING OF THAT ONE THING!

*On the outside, it appears to be any other journal with the title of "Hood's Change-log" written on the front. This is give or take the 100 layers of Tipp-ex under Hood's name, faintly reading "Robin" and "Hood" written beneath. Admittedly, it seems as if Robin was the original author of the log as the handwriting of their Tipp-exed name much better resembles the rest of the title, unlike Hood's chicken-scratch.*

Geno: I went in to look for more books to read and found it!

Fiji: It's fine. I've dealt with worse, especially during my paramedic years. Some of that stuff, mainly car crashes, will leave you awake at night. Your off-putting aura isn't as bad as you might think. For me at least. I think those years have probably numbed the effect of it for me.

*He places his hands on his hips.*

Fiji: What I mean to say is you're in good, capable hands. I didn't earn my old miracle doctor title from doing nothin'. That aside, I should go set up. The infirmary is mostly empty at the moment so you can come with me if you'd like or stay here until due time.

*She falls silent for a moment, face conflicted.*

Dancer: Well I do know... I just know it's not the right answer.

*She stands up, pacing for something to do until her eyes land on a pile of letters on the counter that Lime brought inside. She shuffles through them, looking for any that may be for her that might distract her from the present.*

Dancer: We could try and do some more messing around with those crystals? See if we can get them to do something? I think there's a games system in one of the back rooms though which we could...

*She trails off, eyes set on one of the unopened letters.*

*She holds the offending letter over the bin for a few moments before sighing and tearing it open with her magic. She dumps the empty envelope back on the counter to deal with in a moment's time. On the front, it reads the apartment's exact address in cursive with the name "Bonfire Glow" at the top.*

*Lime glances between the two for a moment before shuffling off.*

Lime: I'm going to talk to Heart. If there's anything you two want to spend the rest of the day doing, let me know.

B: If they had, everyone would know about it. Perhaps we should steer clear in the meantime. I would like to take some time to wander independently and learn the new layout of this area if I can? Are you going to retire?

*Tom gently tugs on Gaster's jacket, his free hand over his own chest.*

Tom: Please? Can we?

*Celaeno huffs to himself but gives the slightest inclination of agreement in the form of the tilt of his head.*

Celaeno: (Fine... if... that's what you wish. I suppose it was years ago in any case but my defences will remain up in the off-chance they haven't changed. If /you/ can find yourself to trust them to this extent though, monsters are far too trusting but... I suppose I can let this slide. I accept your terms.)

*Rose blinks glancing between Celaeno and Fell as if she lost focus, likely in boredom as the two communicated through a language she could only half understand. She slips a cold hand into Fell's, giving it a squeeze.*

Rose: Is everything settled yet?

*In this moment, the door slams open and in the doorway, brandishing the book as if it were the holy bible against a vampire, Geno stands gleaming with prideful excitement.*


*Ripper has ventured from the bar and now stands in the doorway, watching the others.*

Ripper: I've done a good job at protecting. Everyone's in one piece, nobody left and I didn't even need to do anything. This is so easy.

*Fiji listens carefully then gradually zones out, growing impatient. He shakes his head, holding out his hands in a placating manner after a moment of silence.*

Fiji: I've seen it. Multiple times now. I'm still fine. So I must have built some sort of immunity. Besides, it'll probably be much less effective with you out. In the end, it's a "what if" not an "it will", I can take that chance. Besides which, it isn't as if I'm terribly keen on staying in this hell forever.

*He huffs, pausing to push his thoughts back far below the surface. That was unprofessional, he shouldn't have let that slip. But what /does/ he have here?*

Fiji: Look. If it'll make you feel better, as soon as I start feeling... you know... I'll just stop. I'll finish the procedure then and there. Deal?