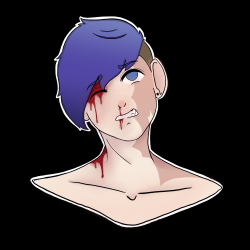 Cylie replied to Cylie's topic
She let out a surprised squeak as she was picked up. Clary buried against the fabric of soul's shirt as the sudden movement had made her dizzy and proved to be very disorienting. She eventually relaxed into him and was once again taking soft, steady breaths.

Autumn was coming to an end, winter begging to show itself as the wind blew frigid kisses that brushed against their skin. The sky, a dull dreary grey hid the sun with morning clouds. The trees had already shed their leafs and now stood, looking over the land, branches bare and dry. The ground itself had little greenery left, the grass had turned brown and brittle, bushes, plants dead and flowers no where to be seen.

The laboratory itself had been built in an isolated area in hopes of containing the virus. It would be a long walk to get there. And Clarissa couldn't help but to stare at the land in awe. She'd never before been outside like this.

Cylie replied to Cylie's topic
"I'm. . .I'm sorry I'm not sure what you're talking about. . ." Clary said softly, still holding soul's hand her grip weak, but tight as she was fairly sure if she let go she was going to fall. "I don't understand what's happening. . " She admitted, "I don't even know where we are." It was clear that all of this was stressing her out and she was a bit overwhelmed.

Cylie replied to Cylie's topic
(James I think itd be interesting if they went back to the labs it's be a chance to run into bruno too!)

Cylie replied to Cylie's topic
(welcome Bruno to a world that welcomes none.