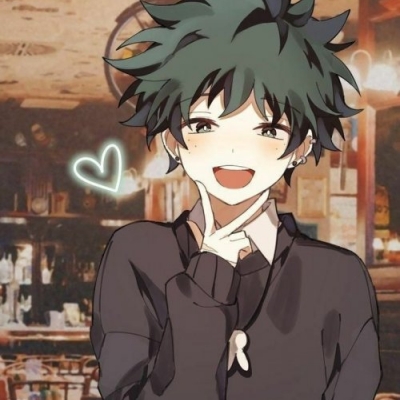 Growing up Quirkless in Japan has always been incredibly difficult for Izuku, often looked down on and regarded with disdain by those who were favored by a Quirked society. His mother did her best by him, giving him what support she could, but little could be done against such a negative deluge on such a constant basis. It came to a breaking point in middle school when his former best friend, Bakugou, told him to jump off the roof when Izuku had been called out for his interest in applying to UA. The following situation with the sludge villain, coupled with his hero All Might telling him to 'be realistic', only compounded things and Izuku felt himself breaking. Desperate, he'd gone to his mother for help and, with her encouragement, he started therapy.
It was through therapy that Izuku started to branch into hobbies that could help with his anxiety and fidgeting, dabbling in things like piano lessons and knitting with varying levels of success, until he tried his hand at baking. He was a passable cook, but it was in baking that he flourished and found solace, especially when he realized that applying to UA wasn't feasible and thus was heartbroken at the death of his dream. His mother didn't let him linger on it, though, encouraging his current skill set as he went through high school and worked part-time. This especially came in handy when his mother suggested that he open his own café or bakery, making him the deal that if he could make enough for half the price for a shop, she would cover the other half. Upon graduating, his mother and himself worked hard until his tentative new dream came to fruition; Verdant Café.

Given how he'd been treated as a child and teen, Izuku had immediately made it a firm first rule that no discrimination was allowed in his establishment. Another rule quickly followed that anyone and everyone was welcome, regardless of their status in society (be it hero, villain, vigilante, etc) and that his space was neutral. Anyone who breaks a rule gets kicked out or banned from returning. (Wip)
.   .   .

RolePlay asked the question
Q. Did you know you can change your profile background and colors by going here? www.RolePlay.me/customize
A. "Y-yes!"
Mar 31st 2022 15:47