Forum > Crime > Looking for a "You" inspired rp from the 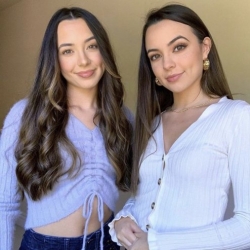 If you're interested in doing a "You" inspired rp add and message me with a picture of your character and a description including:

I will roleplay with guys and girls, but must be willing to play a guy in the rp. Must be literate and write at least one para for each reply!

Sadie woke up early as the sun shined through the windows of her small studio apartment, which was all she could afford in the big city on a barista salary. It was enough to scrape by while focusing on her courses. When she started in college it was the first time living away from her twin sister, of course not too far away them being only about half an hour apart. It was still strange sometimes.

Sadie sat up in bed stretching her arms before stepping out of the bed. Sadie yawned softly as she made her way into the bathroom looking up slightly into the mirror that was hung a bit high for her height only being 5'1". She looked down to the sink picking up her tooth brush beginning to brush her teeth and washing her mouth out shortly after. Sadie slowly made her way back into her attached living area that was all one big room besides the bathroom. Sadie picked up some clothes off her bed before stepping into her black jeans and pulling a dark green turtleneck over her head pulling her long dark hair out from under it and tying it in a bun.

Sadie slipped on her shoes and tied her short black apron around her waist before making her way out the door. It was Sadie's first week of working there so she was pretty new. She had been there long enough to know what she was doing, but not long enough to know the regulars. Many of them seemed to know her though, some of the men passively flirting sometimes and Sadie going along with it being the shy girl she was. Most of the time she didn't even think they would be flirting with her.

Sadie made her way into the café as it had just started to open up seeing her coworker making some drinks as the line started to grow. "Can you hop on the register?" Owen asked Sadie and she gave a small nod before hanging her bag up. "I can help the next customer." Sadie said loud enough to hear but just barely with her sweet sounding soft voice and the customers murmuring amongst each other.

(Looks like this wearing that shirt, black jeans and black shoes with a small apron around her waist)