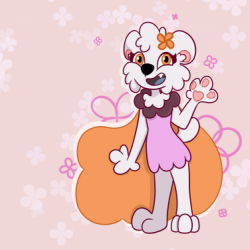 Weapons: Two chakrams that can fuse together into one large shield-like chakram

Personality: Folwin is very prideful in his own abilities; he’s not egotistical, but he does take pride in what he does and isn’t afraid to say he’s great at it too. Though he’s pretty weak in terms of strength, Folwin has very quick reflexes and instincts and is rather skilful. Whilst he tries to appear manly and strong, he has a fondness for pretty flowers and soft harp music (which he plays very well) and he isn’t afraid of people knowing that, however, he does resist help and will NEVER ask for it, saying that he could help himself. Folwin can get rather angry when something goes wrong. He will mostly follow orders and is very efficient in doing so, however, if he ever disagrees with what the leader says, he will stick with what he believes. Folwin is VERY stubborn.

Appearance: Folwin, being half human and half fairy, is rather short, standing only 5ft. He’s got pale, somewhat dull, pink skin and very pale, brighter pink hair. His hair falls down to his shoulders and he has two small ponytails falling over his ears. His eyes are a very pale blue in colour. Folwin keeps his small harp in a rather large satchel that hangs over his shoulder while his weapons sit on his back with straps to keep them in place. He wears a deep blue, short-sleaved tunic with silver markings, dark grey pants and pale grey, fur boots. His hands are wrapped with black leather so that his weapons can’t accidently cut them when he uses them.

Special Item(s): His mask/muzzle, usually used to keep him calm and in check.

Special Abilities(if any): Blind rage. It dulls his ability to feel pain ('tis but a flesh wound!) but in exchange for that, he has no control over his strength and who he attacks. Best used on a 1x1 fight or if he is sent ahead. Mask may be left behind and will have to be forcefully reapplied.

Personality: When a battle is involved, Kristopher is like a bull in a bull fight; he's always ready to charge in head first. When not involved in a battle, he is a quiet person. Some would say he's reserved, but really his snide comments and remarks are just said too softly. His monotonous tone tends to give him cold and brooding vibes to those who've just met him. Overall, his personality is black and white. Either he's quiet and calm or he's enraged and murderous.

It was a busy afternoon in the Beast Hunter headquarters. The main room consisted of a well-crafted wood structure. Also, there was the front desk where Lucas rested with a pint of beer by his side. To the right side of the room, there was the tavern, which was the Beast Hunter’s only other source of funding besides slaying beasts. A multitude of round, wooden tables and stools crowded the center of the room. To the left, there was the admission desk, where newcomers could become Beast Hunters by slaying their first beast and bringing back proof of their victory.

Not far from the admission desk was the bulletin board where various bounties were posted.

Lucas’s desk was crowded with scrolls and royal acknowledgments. His pike shield, along with his holstered shortsword rested along the left side of his desk. His bow and quiver rested at his feet. Lucas was wearing his usual orange-lined chainmail armor leggings and jet-black t-shirt. He was currently writing a letter to one of his clients in Tunami. Later, he finished and tied up the scroll and pushed it aside; then put his feet up on the desk and let out a deep yawn.

Kristopher sat at the bar, eating a piece of steak. His muzzle sat beside the plate in an easily reachable spot. The long, lion-like tail swayed behind him as he focused on his food. He tried to tune out the noise around him in fear someone would spark his anger and he'd lash out. "He kinda looks like a beast." He had managed to hear from one of the newest beast hunters. He slammed his fork down into the bar, causing a dent in the wood. "I'm not hungry." He said softly and wiped his face with a napkin before returning the muzzle to his face. Kristopher stood and scanned the small crowd, picking out a fearful gaze. "Next time I'll take off your head." He said, though his soft words were unheard over the chatter of those around them. To the beast hunter, Kristopher only stared.

Folwin had found a rather crowded table and was having a good time just chatting and laughing with other Beast Hunters. Sure, he was a little uncomfortable being around so much alcohol and he didn't dare to even drink water as he was afraid someone might put something else in it. But no one else seemed willing to talk to him, not with his somewhat monster like appearance; besides, when people are drunk they'll laugh at all your horrible puns and jokes.

The hybrid's chatting was interrupted (well, he was interrupted, the others didn't seem to notice) by the quick sharp sound of... something. Looking around, Folwin quickly noticed Kristopher. He hadn't even heard the nasty comment thrown at the demon but he could tell what was going on just by his expression.

Folwin excused himself from the table and walked over to the demon,
"You doin' alright, pal?" the young hyrbid asked, trying to distract the fellow Beast Hunter from the rude statements around them.

Kristopher hooked a clawed finger under his muzzle, implying a threat to those who understood what the muzzle was there for. Sure enough, when he turned to face Folwin, his pupils were dilating and contracting as he struggled to control his anger. However, in a calm voice he spoke, "Yes, I think I'm fine." His finger slipped out of his muzzle and he closed his eyes, letting out a sigh. "I don't know why they talk like that and then don't own up to it. Say it to my face." He said, and if he were one to yell, he'd certainly be yelling at the pair who talked behind his back.

Lucas’s feet dropped to the floor as he leaned forward and grabbed the pint of beer that rested on his desk near the Sabrewolf tooth decoration. “If I want to keep the Beast Hunters going, I have to get stronger.” he thought to himself as he took a swig from the pint, before setting it back down on his desk.

He wiped his face with the front of his shirt, then sprung from his seat and jumped on top of the desk. “Gather ‘round, hunters! I’ve got something to say to you all!” He yelled out to the entire hall. He caught the attention of most of the individuals in the room. Then, Lucas watched as some of the Beast Hunters began to gather around in front of him.

Previous12Next
You must be logged in to reply to this topic.