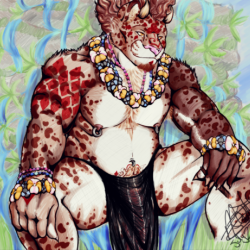 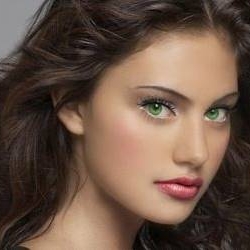 Looks like: I have a photo in profile pics album. Just tell me if you'd like to see.

Personality: usually cool headed, a lot like Goku, c*cky at times, intelligent, and has a very bad temper

Bio: After being born his father (tarble) sent him to his uncle (vegeta). Hoping that his uncle would train him to be a excellent fighter. He did. Vegeta made sure he wasn't going to be weak by training him more than trunks. He achieved super saiyan at a young age of 4, super saiyan 2 at 6, and super saiyan 3 at 13. Goku also helped train him. He thinks of vegeta as a father and most of the z fighters thought he was Vegeta's son. He hasn't dies except for buu saga( of course everyone died :P) . He looks at trunks as a little brother, because he is older than him by a decent chunk.

People call her Corey, it's short for her Hydra given code name Petrichor. She doesn't remember her real name as she's been with Hydra since a very young age- that is, until she'd escaped when she was an early teen. They had her because of her unique mutant status. She's a vampire (ooc if you don't like that then whatever). She was turned by one of Hydra's agents then brought in, as her abilities that developed from the change could be of use. She's a hydrokinetic, meaning she can control water and rain, and create isolated storms, earning her the code name. She's a bit in the smaller side, 5'4" and thin. Corey has gray eyes, pale skin, freckles, and ashy blonde hair. She's not one for showing emotions, per her training with Hydra, but that doesn't mean she doesn't feel them. She's usually hard headed and stubborn with authority figures, but if she likes you, well... She's still stubborn just easier to be around.

Name:Sarah Quitten
Age:17
Orientation:half Neko Half Human
sexuality:Bisexual
Hair colour:Pink
Eye Color:Brown
Job: She was given by her dad a maid cafe and 500 000 000$ to run it
Personality:Sarah is a girl that likes people,she is always full of energy,she is a bit silly, shes always happy but when she is mad she is mad and for real and she is a kind of weird girl

Some days before the school trip.

They have Anatomy class and most of students -of course- are as happy as if they were heading to their parents' funerals.

He is already into the classroom, nothing new. The homework are already written on the blackboard, that's the priority of course.

Smoker: Only in social events

Personality: good under pressure, has a go with the flow attitude, kind, likable, harmless prankster, intelligent, not judgemental, and artistic

Abilites: Knows how to play a lot of instruments and can dance really well. Also has a personality people are drawn towards

Bio: I guess you can say he has had a love for music ever since he was born. He had quite the average life, he is from a middle class family that loved him very much. He has a 10 year old half-brother and an 8 year old half-sister named Max and Marykay. He is going to college to be a high school band director. However, to make money he Dj's for a night club and some parties. The reason for him becoming a band director is that he greatly admired his middle school director band director who left to pursue a better job as a music therapist. Since that middle school director help showed him his great love for music he thought he should show that to the other people who haven't yet discovered their passion for music.

Quote: " I plan to live life to the fullest and those who get in my way can go f*ck off"

At the end of the wedding party, he and Amelis took both Tomiel and Murphy with them to their own mansion, to leave total freedom and peace to their parents for their first wedding night and for the upcoming Honeymoon.
Jackil and Cora considered to take Tomiel with them for the travel they planned for Honeymoon but they were convinced by their parents and brothers that it'd be better to leave her home with the grandparents, since she would lose a month of school and they'd be less free.
So, he picks Tomiel up at the end of the party, waits for his family and Murphy to be ready and they teleport back to his own mansion in Shadowmoor, the main city of his ex-Dukedom (now Dorian's), Schest Auf Shadowmoor.

At Jackil's and Dorian's wedding, she and her sister were invited to, going with Madre as their father had not yet come to them.
She though is very bored, she doens't know anyone and doesn't feel at ease.
She notices a waiter near her but she doesn't know he is a waiter, considering he is so elegant, she thinks is an invited who is holding a tray for unknown reasons.
She decides to approach him and have a few words.
«I've never seen such a huge party in my life...»

Occupation; A regular cybersecurity employee by day and a vigilante hacker by night.

Background; As a senior network technician for cyber security firm Allsafe, Elliot protects corporate clients — including the ubiquitous Evil Corp — from security breaches and data theft. As a vigilante hacker, he monitors the people in his daily life and protects those he’s close to from their own flaws, sometimes with unpredictable results.

Originally from Washington Township, New Jersey, Elliot now lives alone on the Lower East Side. He suffers from crippling anxiety, which stems from memories of his difficult childhood. His father died when Elliot was young, and his now-estranged mother was brutally cruel. Elliot has spent most of his adult life isolated from the world around him.

After being arrested for financial hacking, he has been attending court-ordered therapy for almost a year. Elliot, however, prefers self-medication by morphine, an addiction he mediates with suboxone. He obtains both from his next door neighbor, Shayla.

Gender: Male
Age: 18
Zodiac Symbol
Race: human
Hair Color: Black
Eye Color: amber brown
Weight: 140
Height: 5'2
Blood Type: B
Special Ability:he is very talented with his sword
Weapons:sword
Strength:his friends and protecting them at all cost and destroyer
Weakness:seeing people die and losing apart of himself
Fears:death getting old he hates being in small places in darkness
Talents:he is very gifted with a sword also he is good with making things
Personality:sweet kind caring strong willed determined can be a little careless sometimes loving and very nice to be around him:)hes charming after all he is a prince lol
Sexual Orientation: straight
Martial Status: in love but keeps it to himself
Children: None
Father: Cless no longer alive
Mother: aroara no longer alive
Siblings: no

EVERYONE IS IMMORTAL UNTIL PROVEN MORTAL

Since his RPer is lazy to do all the "Benjamin returned" RPs a second time, let's say that after he visited Dorian and Jack at the hospital, he of course rushed to his wife. Then he went immediately to each one of his children wherever they are, including Thomas, and he also visited Malicedom to see Michael and Gabriel immediately.
He also visited Anthony who immediately aimed to hand him the crown, but Benjamin refused, preferring his son to stay King, Dorian to stay Duke and himself just enjoy his bloody life after two years of slavery. Lots of hugs, cuddles, sweetnesses and unicorns for all.
The young Auriold who helped him to return, has been hired to be his personal valet which is surely a much better occupation than what he could hope for given his position and as he promised, he made sure he would not even see a cell for a second after returning to Nortrig.
But he still has to be introduced his grandchildren, he will wait for their parents to take their children to meet their grandfather.

You know how sometimes people think the same thing? Well I think I know why. ((Oh god here we go)) our brains are made up of a bunch of electrical impulses right, so naturally so are our thoughts, I thought that maybe the reason people thought the same thing was something that worked similar to TV signals, our brains act as both a receptor and a transceiver intercepting the waves coming to them, though only picking up the ones they are accustomed to, for example, you have a friend that you have been friends with for years and years.
You message that friend something and they were thinking the same thing only minutes before.
I think what has happened is our thoughts have been zoomed across the world along with all the WiFi signals and connected with each others brains because they have 'tuned in' so to say, with each other.

I think it happens too often to be a coincidence and came up with this on the spot.