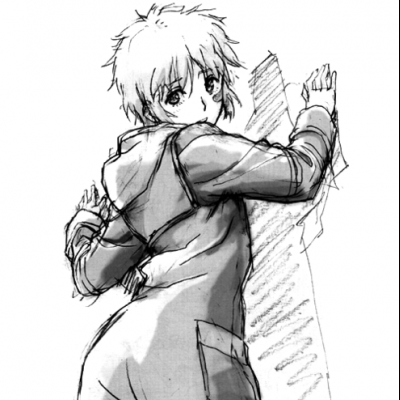 18 / Male / Single
United Kingdom
( Hello everyone ^ ^ I'm open to cross-overs and I'm open to other people using OC's I love quite a lot in a rp, adventure, a little sprinkle of romance, suspense and light drama, not opposed to gore either. I'm very sweet and understanding, I love making new friends and look forward to rping and chatting Ooc as well <3 ~side note: yes I know my English isn't always the best, and my spelling can be awful I'm sorry I do try >///<)

Appearance:
Height. 170cm (5' 7")
Weight. 54kg (119 lbs)
Body type: slender (lightly toned)
When Shion was twelve years old, he wore a white shirt with a light turquoise button up sweater vest over it, light brown trousers, dark brown shoes and his No. 6 ID bracelet on his left wrist. He was born with brown hair and brown eyes, but at the age of 16 these changed to white hair and red eyes due to the substance emitted from a parasitic wasp. He also developed a long, pink/reddish scar; twisting around his body from his left ankle up to his left cheek/under his eye. The long scar seems to have emerged from the inside of his veins. He is slim, but not quite emaciated. Another outfit he wears is black trousers and a red coat with a hood. Underneath that, he wears a white collared shirt with a light turquoise sweater over it.

Personality:
Shion is kind and caring, but is also shown to be a generally naive and idealistic person. He has an amazing IQ level, proven by his acceptance into the Special Course and ability to treat and stitch up the bullet wound in Nezumi's shoulder at only age twelve. When he was restrained to his own bed by Nezumi, rendered motionless, he seemed fascinated rather than scared of his acquaintance's ability.

Despite his nature, if someone or something he loves is in danger, he does not hesitate to save them. He's not easily angered; however, he isn't above becoming violent when his loved ones are threatened. Shion seems to take on a different personality when he does so. This is proven when he murdered a guard, only after the fact he did, he got frightened over what he had done, sometimes not believing it was him that did the act.

Though grateful for No. 6, Shion seems to have a slight doubt about it and the whole system, as noted by Nezumi. He is insecure about many things, including his slender body. He loves his mother very much and seems to like daydreaming as well.

Other information:
-18 years old
-Birthday: September 7th
-Blood Type-AB
-Bi (leans more towards males)
-Innocent
-can be clueless at times
-Overly curious
-His name comes from a wild flower (specifically, the aster). His mother gave him that name due to the fact that she likes to pick wild flowers.
-Shion's ID number is Qw-55142 after he loses his Gifted Curriculum status.
-Shion dislikes celery.
-Shion has a habit of pulling his hair when he's anxious or stressed.
-prone to asking a lot of questions
-Submissive
-Virgin
-Shion black's out when he's in rage, when his loved ones are in harms way.
.   .   .