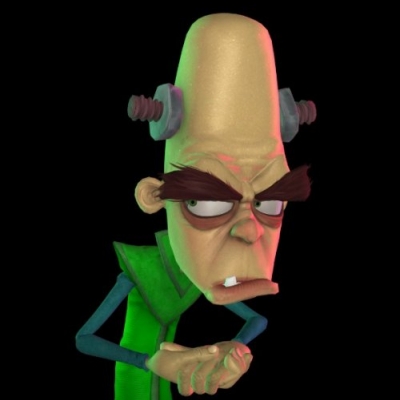 How he sounds like, stutter and all. No idea why the video shows the wrong Model of him, but still, this is how he sounds. www.youtube.com/watch?v=wXz1Cbe7e6g

I will RP Brio as Bi.

I do all genres.

I RP in 1st person. I truly don't care what perspective you use.

A proud servant to @SultanaAdora

This profile is for the Brio from Crash 1/NST

"So, you're helping Cortex to gather Crystals, and yet you've acquired a Gem! Interesting! Heheheheh! Well Crash, heheheh, know this, as long as you are allied with C-C-C-Cortex, you are my sworn enemy and I will do everything in my power t-t-t-to stop you! Heheheheheh! If the fate of the world is truly your concern, you must g-g-gather the Gems, not the Cr-Cr-Cr-Crystals."

Dr. Nitrus Brio (N. Brio for short) is a scientist who formerly worked under Doctor Neo Cortex. Brio's loyalty has fluctuated throughout the series, working on his own accord in Crash Bandicoot 2: Cortex Strikes Back, with Doctor Nefarious Tropy in Crash Twinsanity, and even returning to Cortex's side in Crash: Mind Over Mutant. His name is a play on the word "embryo" (a fact that he himself alludes to in Crash: Mind Over Mutant).

Like most of the characters in the series, Brio's age is uncertain, though a piece of Crash Twinsanity concept art suggests that Brio is the same age as Cortex and N. Gin. As a child, Nitrus Brio was a classmate of Neo Cortex and N. Gin in Madame Amberly's Academy of Evil. Brio is responsible for taking Neo's faulty prototype Evolvo-Ray and refining it into a fully functional weapon. However, his lack of self-esteem allowed Doctor Cortex to take full credit for the creation.

Along with Cortex, Brio made up the other half of the Cortex Commandos before setting up base in the Wumpa Archipelago.

Brio is a shy and meek man, which serves as a contrast to Doctor Cortex's megalomania. He has never had people respect him or take him seriously (a fact he laments in Crash: Mind over Mutant), resulting in a low self-esteem. It is this weakness that originally caused him to join Doctor Cortex in his plot for world domination. However, it is also this weakness that allowed Cortex take the full credit for an invention that Brio was more responsible for attaining any sort of effectiveness, resulting in the development of intense inner-contempt and jealousy of Cortex on Brio's behalf. The most notable examples of Cortex stealing from Brio was the first functional Evolvo-Ray, which Brio did not actually create, but perfected its original faulty design into a more effective weapon. This betrayal on Cortex's part is a continuing source of disdain for Brio and is the prime motive for his abandonment of Cortex following the events of Crash Bandicoot.

As a way of making up for his mistake of allowing Cortex to take credit for his inventions in the past, Brio has developed a notable level of self delusion, as he cites himself as being the actual inventor of the Evolvo-Ray (Even though he only perfected it). This worsens even further where he constantly, almost impulsively reminds anyone in his presence of his inventions, even crediting himself with several other things that he couldn't possibly have created, like recycling, slinkies as well as claiming to have written a bible.

In the earlier games, he stuttered and occasionally laughed like a madman whenever he spoke. This could be a result of the bolts in his head, or too many failed potions, or perhaps his own low self-esteem got a bit too low.

In the N. Sane Trilogy, his personality in the first game is more solidified. He now acts like a bumbling but cautious assistant with incredibly eccentric mannerisms, a strong stutter, and much more manic laughter.

Brio appears as a taller figure than Doctor Cortex, with an equally tall head, which has twin electrode-like bolts attached to the sides like Frankenstein's Monster. While Cortex and N. Gin wear white lab coats, Brio wears a green one in most of his appearances, but wears a lab coat similar to that of Doctor Cortex in Crash Twinsanity. In some instances, his lab coats do not feature sleeves. Unlike Cortex, who has black hair, Brio has almost no hair to speak of, with his eyebrows being the only pieces of visible hair on his body, though a piece of concept art for Crash Twinsanity suggests that Brio had a strand of blonde hair on his head during his childhood. In Crash Twinsanity, Brio's skin has become more wrinkled, and has noticeably darkened, taking on an almost grayish hue, possibly due to the not insubstantial amount of mutagenic chemicals he's been known to ingest over the years. According to Cortex, the mutagen tastes like "peppermint barf, with a hint of..." It is also implied that the mutagen has an addictive effect on Brio, as he's almost always seen carrying and sipping from a beaker of the stuff, although it appears he does this to keep himself in a relatively human state, turning into a musclebound green monster whenever he gets sufficiently enraged and drinking the mutagen to reverse it.

At the start of the series, Brio acts as an assistant to Cortex. While he is somewhat loyal, he has his doubts over whether Cortex's plans can actually work. Brio acts as the penultimate boss of the first game, attacking Crash by throwing beakers at him. Some of these explode and some of them transform into sentient Blobs that can attack Crash. Finally, the battle reaches a climax with Brio drinking one of the same dangerous potions and transforming himself into a hulking monstrosity to combat Crash. When defeated, he accidentally sets the castle on fire. When he wakes up, he decides to go up against Cortex who didn't give any credit to Brio all these years. In the non-canon ending, it was revealed he worked as a bartender prior to this game.

Nitrus Brio reappeared one year later in the form of a hologram when Crash got his first gem, attempting to convince Crash Bandicoot to save the world by gathering the Gems he needs to destroy Cortex's space station instead of the Crystals that Cortex needs to control the Earth, threatening to destroy Crash if he keeps gathering the crystals. When Crash continues to gather Crystals, Brio recruits Ripper Roo and creates the Komodo Brothers and Tiny Tiger to assassinate Crash and keep him from gathering the Crystals for Cortex. Brio finally manages to convince Crash to gather the 42 Gems needed for the laser to be operational, and gives him the honor of activating the weapon, destroying Cortex's space station. He appears to have doubted that Crash would find all the gems, as in the 100% ending, he says, "You have acquired all of the Gems! Incredible! Heheheheheh! Crystals are not the only means of harnessing planetary energy. Heheheheheh! The Gems have that ability as well, and with them, I can destroy the Cortex Vortex... forever! Heheheheheheh! Let me warp you to my completed laser installation, hm..."

Despite not appearing nor mentioned in the game, Brio is indirectly responsible for Uka Uka's release from his prison. A piece of the Cortex Vortex, which was destroyed by his laser beam machine, inadvertently crashes into the temple where Uka Uka was sealed in.
.   .   .

From Doctor to Slave.