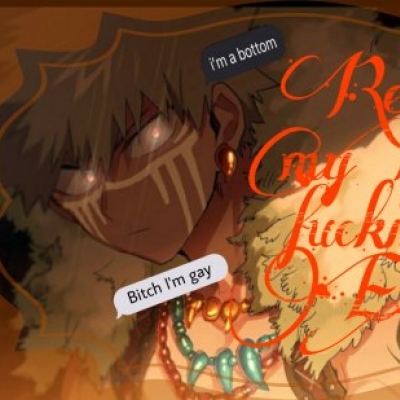 (Katsuki Bakugou)
17 / Other / Its Complicated
Texas - United States
Ok so before anything else if you are checking me out for an RP I have rules. Posting them below so if you try to ask for something that obviously is not placed below I'm just gonna ignore you like the extra you are.

Rules:
1. I am semi-lit to literate. I don't mind one-liners if you get brain block but if that's all you're going to give me walk away please. Also it has to be in third person.

2. I pretty much only RP as Bakugou Katsuki. I might attempt someone else if you ask but that's about it.

4. So if #3 wasn't obvious about me being a bottom that should also inform you that I don't do straight RPs. I love yaoi and forever will.

5. I also only RP Canon characters (Actual characters from the show) if we are RPing off the show. I will only accept RPing with an OC if you can possibly catch my interest while also keeping the above rules in play. (So far only 1 person has been able to do so.)

6. I do RP OC characters with OC plots I do have a few in mind so I might post some if I haven't already, but I'm more incline for BNHA RPs more at this moment.

Now that my rules are out of the way and you're still reading I guess you can get to know me. So despite what the age thing on the profile shows, since I based the stuff off the character, I'm in my twenties with a part-time job. Pretty much the only day I'm really working full time is on Saturday with a 14 hour shift with no breaks. However work isn't super hard since I'm a receptionist so all I do is answer the phone and usually after 4pm everything dies because that's when our service department closes and only sales are open. (I work at a car dealership.) I've been RPing for at least 10 years so I know what I'm doing and the different styles that come with RPing whether its script, first person, or third person though has I stated I really only RP in third person. Just sounds better that any other. I'm actually pretty down to earth and really nice once you get past my outer shell, but blow up or attack me and you can bet your ass I'll murder you in a heart beat and block your extra ass. Other than that feel free to shoot me a message and let's start an RP or two!

I also wanna say thanks MrSparkles and _taekook_ for being the best two friends I've met on this site!
.   .   .