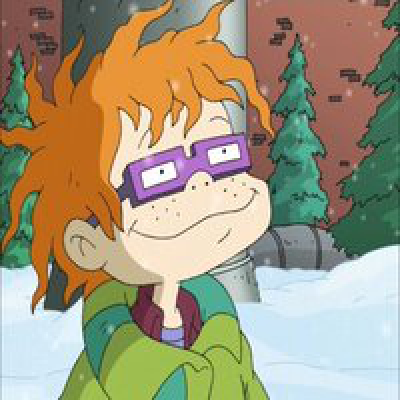 21 / Male / Single
Connecticut - United States
Charles Crandall Norbert "Chuckie" Finster, Jr. is the adorable best friend of Tommy Pickles and acts as the series' deuteragonist (in Rugrats in Paris: The Movie, however, he serves as the protagonist). Chuckie's mother Melinda died from an illness when Chuckie was a few months old.

In Rugrats in Paris: The Movie, his father, Chas was going to marry Coco, an evil woman who hates children, and tries to get Chas to fall in love with her, but in the end, Chas fell in love with and married Kira, Kimi's mother. His beautiful new stepmother is loving and caring, just like his father and biological mother. Chuckie also has a puppy named Pepper (also known as Sparky) and a poodle named Fifi. Chuckie was 2 years old in Rugrats, 11 years old in the All Grown Up! pilot episode "All Growed Up" and 12 years old in All Grown Up! series itself.


Chuckie is pessimistic and easily scared, and at the first suggestion that he and the other babies should do something or go somewhere, he will always say, "Maybe this isn't such a good idea". All the same, he's still best friends with Tommy, Phil, and Lil). Among his fears are adventures, cats, losing his glasses, germs, bad things happening to his friends, clowns, and the "guy on the oatmeal box with the scary hat" (a parody of Quaker Oats).

He is loyal and often brave, facing his fears briefly to come through for his friends, whenever there's a problem, Chuckie's there to help his friends get through it emotionally. Chuckie doesn't really like misbehaving, but his friends often get him into trouble by accident. He is very close to his father Chas, and is usually the main target of Angelica's bullying. Chuckie was the only character who did not come from a two-parent household before the remarriage. It is revealed in the episode "[[The Alien" that Chuckie has an outie belly button, and is revealed to be left-handed in "Chuckie's a Lefty". Things had changed for Chuckie in Rugrats in Paris, when he got a new stepsister named Kimi Finster, and a new stepmother named Kira Finster.

In All Grown Up!, Chuckie is still timid, but he is a bit more of a risk taker and tries hard to avoid being seen as a coward. He has trouble lying to others and still appears to be the voice of reason among his other friends in the television show spin-off as his younger counterpart would be, but has grown as a result of the development that took place between Rugrats and the spin-off television show.


(After a thousand failed verse attempts, then verse switching attempts I think I'll settle with this verse. Don't care if it's not "edgy", or "dark" enough for certain people's taste on here it's one I find appealing. So if you hate cartoon accounts then uh don't add? It's not rocket science man. Also Chuckie Finster was a go-to choice for me regardless.)

Chuckie Finister doesn't have many love interests, aside from Nichole and possibly Susie Carmichael. It has been hinted at on occasion that he finds Susie attractive but he's never expressively shown it for reasons unknown. Lil also finds Chuckie cute in certain circumstances, but nothing explicitly ever shown most likely from her dating Tommy for a period of time. Chuckie's bond with Angelica eventually strengthens in All Grown Up going from being terrified of Angelica's presence to being more understanding of her. As for personal writing shipping preferences, I suppose that Chuckie x Susie, and Chuckie x Angelica are fine to a extent. But anything considered immoral or borderline incest is obviously off the table.
.   .   .